My mother’s tomatoes outdid themselves this fall, and I was the happy recipient of a large colander of them two weeks ago. I do love tomatoes, but after several dinners of them with cottage cheese, and tomato soup and sandwiches, even I cave and find a way to can them. You probably already have your own go-to tomato sauce and salsa. If you have a bumper crop of juicy garnet-red orbs this fall, make tomato jam. You can spread it on sandwiches, serve it on a cheese plate or top meatloaf with it. This is your year for tomato jam. Just don’t do what I did and splash boiling hot water on your chest, and then have to walk around with an ice pack for a few hours – avoid that part. Do however, make this on a rainy day that begs you to curl into a blanket that your grandmother made and sink into another reading of All My Puny Sorrows by Miriam Towes. Have some goat cheese handy, with a little piece of bread – to check that the jam is, you know, just as good as you thought it might be. 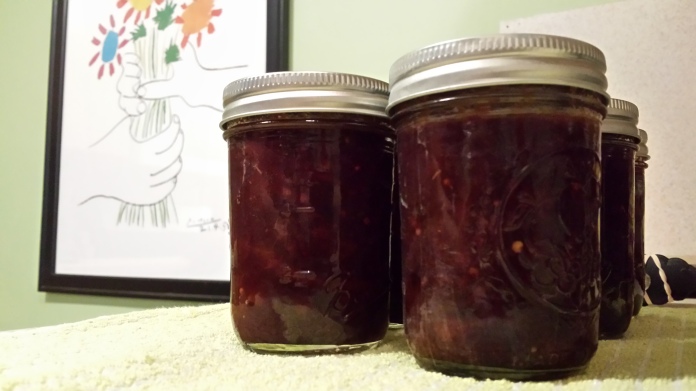 3 thumb-sized pieces of fresh ginger, peeled and sliced into coins

First things first, slice your lemons in half length-wise, then slice into thin half moons. Remove the seeds. Set these aside in a bowl while you move on to the next step.

Arrange all of your whole spices into a neat pile on a large-ish sheet of cheese cloth and tie shut with a long piece of twine.

In a vary large pot, combine the tomatoes, sugar and butter and bring to a gentle simmer. When the fruit has given up the ghost, so to speak, and has relinquished its juices to the sugar, you can crank that baby up higher to a boil. Boil for about eight minutes or so, stirring so as not to burn the bottom. Add the lemons and the jalapenos. You washed your produce, right? Please say you did that. Cook the tomatoes with the lemons for about five minutes.

Now added the vinegar, the juice from those limes, the molasses and the ginger. Add the cheese cloth with the spices, but tie the twine to the edge of the pot so that you can easily retrieve it later. Simmer this until the mixture has reduced by half. This is going to take at least two hours. Stir occasionally.

When reduced by half, ladle into clean jars and process.